Starting from September 2002 all automakers in US – have been federally mandated to include anchors in every manufactured vehicle as standard equipment.

But cars manufactured before September might lack anchors and there are many such cars still running on US streets which don’t have anchors or tethers pre installed in them. This raises the concern of how to tether car seat without anchor.

If you own a vintage or a more than 20 year old car – then the chances of them – not having these vital accessories increase. You must have not felt the need for anchors and tethers if previously you didn’t had any infant travelling along with you – but if recently you were required to travel with a car seat – than anchors and tethers become essential to tuck the kid’s safety seat.

This is one reason cars lack anchors. Another problem where even cars having anchors are useless to tuck car seats – is that all Latch systems are not created equal by the manufacturers. So even if your car has anchors – they are of no use! And you will have the same query – how to tether car seat without anchor.

Installing a car seat with a seat belt

In both of the above situations – a seat belt is often the best — or only — option when installing a car seat. And every car seat in US can be installed with a seat belt.

If you have child seat’s manual then follow the instructions in the “lap belt installation” heading. If you don’t have the manual or you are unable to understand (because generally these manuals are very lousy) then read below. We have provided below a step by step guide (with photographs) – which will help you install a car seat with a seat belt in any vehicle you own.

Put the seat belt in the automatic locking mode

In order to secure a child-safety seat using a seat belt – make sure that the seat belt is in Automatic Locking mode.

Seat belts have two modes – Emergency locking mode and an automatic locking mode. In Emergency Locking mode, the strap of the seat belt can be pulled freely. The strap gets locked only when the car abruptly slows or stops. The belt then gets into a tight, fixed position.

You have to switch the seat belt out of Emergency Locking mode and into Automatic Locking. You can switch between them by a switchable retractor which is fixed alongside a seat belt. Pull the belt freely until the strap webbing runs out. Put the slack back into the retractor. This will fix the strap in a fixed tight position.

Some vehicles have a button that switches between modes. If your car doesn’t have this you have to manually do it. Below are steps demonstrating how to switch from emergency locking mode to automatic locking mode. 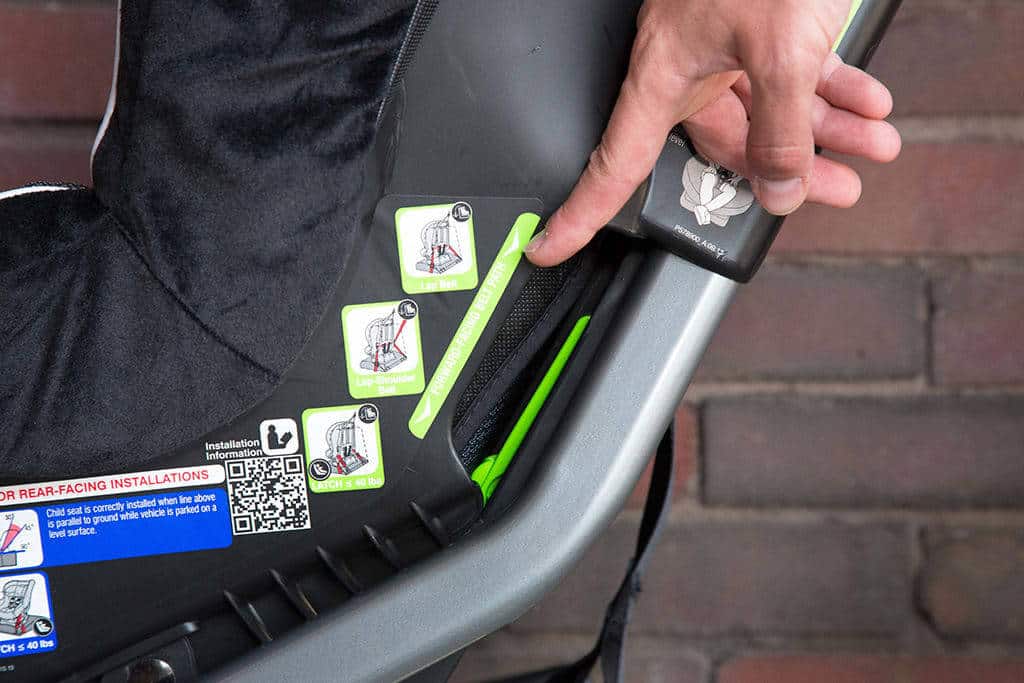 Insert the seat belt strap into the car-seat belt path. Check for the appropriate slot wherein the seat belt gets properly buckled. Then pull the seat belt out of the retractor. You will hear a click when the belt is completely out. Do not pull the belt forcefully – so that it does not get stretched.

After the belt is all the way out – insert the belt slack back into the retractor. Listen and feel for a ratcheting motion while you feed the slack back. Refer your car owner’s manual if you find switching between the modes difficult. 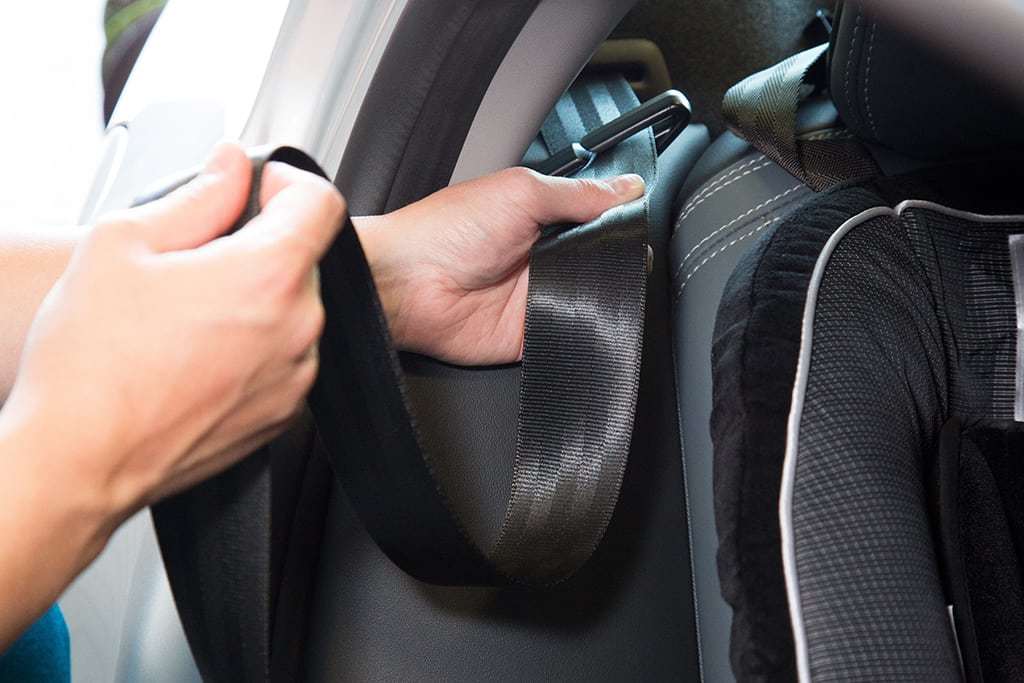 Now pull up on the seat belt strap. Insert it in as far as it will go until the strap is completely tight and fixed. And you are done!

Remember to fix the seat belt strap as tight as possible so that the seat belt doesn’t move at all if a collision or a crash occurs. The strap will hold the car seat in place like a Latch connector does. 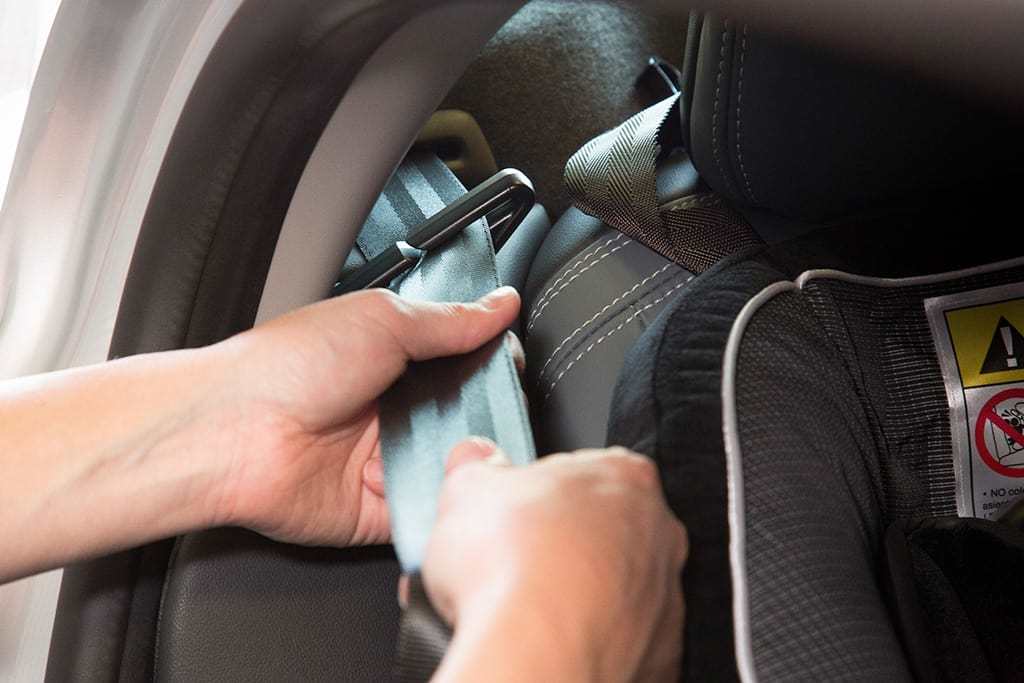 Small kids require forward facing car seat. If you have to install a forward-facing car seat, then connect the tether strap to the vehicle’s top tether anchor too. 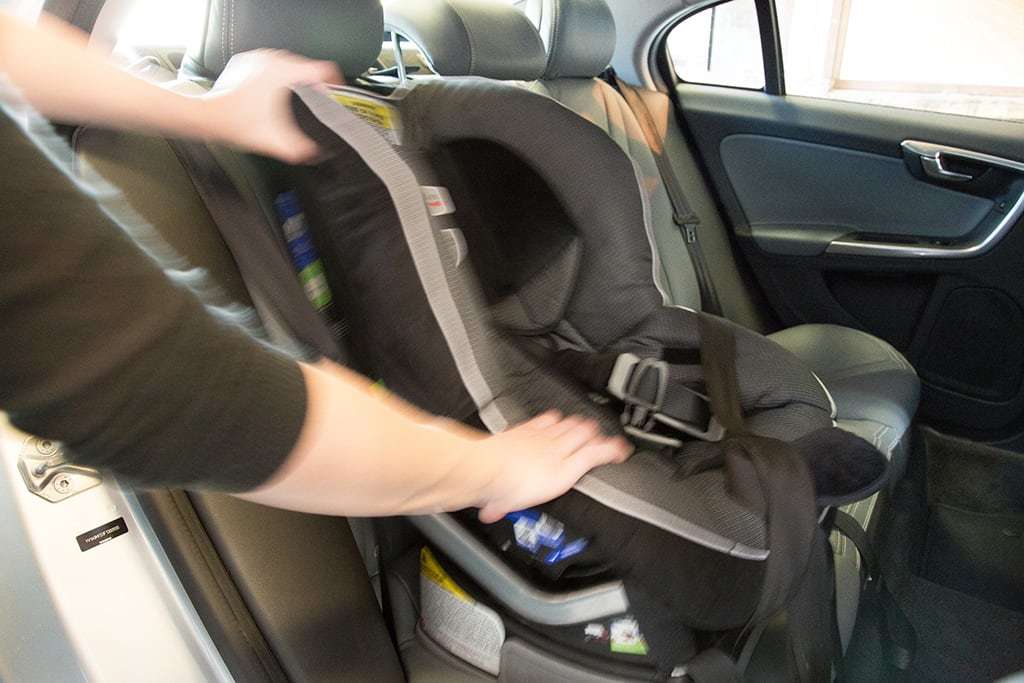 Note – Fastening the car seat with a seat belt should never be done with a belt-positioning booster. Boosters should only be buckled in – using the car’s default, emergency mode.

If you have old cars then you might experience retractor fit issue. The car’s seat belt retractor will not go into Automatic Locking mode.

For this you will need to lock the seat belt strap using the buckle’s latch-plate. This is the section of the buckle that holds the buckle clip to the strap. Lock it so that the buckle doesn’t slide along the webbing and remove the slack from the seat belt. Look in the owner’s manual for further assistance.

You can find it in near-by garages or contact your local technician. He will be able to provide you one.

Why do you need a tether?

The top tether helps limit the top excursion of the head – that is to limit the movement of your head in a forward direction – during a collision or a crash.

Without a top tether the head will move 4 – 6 inches forward, and has a chance to collide with the back of the car seat of the first row – if the safety seat is in the second row resulting in severe head injuries.

If the safety seat is placed in the first row – and is without a tether – than the chances of the head colliding with the interior of the car increases, which can result in traumatic brain injuries.

So it is always advisable to use a top tether, whether you are using latch system or a seat belt to install the safety seat.

Now to the question – how to tether car seat without an anchor?

Retrofitting cars with anchors and tethers

Another option to the above query – how to tether a car seat without anchor is to retrofit your car with lower anchors and tether anchors if your car doesn’t have one.

This is not a general solution because you can retrofit tethers and anchors in certain specific car brands and in their certain models only.

Only Audi and Volkswagen allow retrofitting of lower anchors. And before you search whether it is available for your car or not – keep in your notes that both the brands charge you for doing so. Free servicing is discontinued.

– For model years 1999 – 2002 Volkswagen will install latch system – having upper and lower anchors for Passat Models.

– Retrofitting of tethers is also available for 1993 – 1999 Volkswagen vehicles.

Ford, Chrysler and GM generally retrofit one tether anchor in their vehicles – not having tether anchors factory installed assuming that the vehicle can be retrofitted. And the best part is that they do this for free.

If you have a 2001 or a newer model – which has tether anchors in some positions and not all positions that retrofitting in not an option for the neglected positions.

If you have a 1989 – 1999 car model – then tether anchors can be added to these. Most of these vehicles come with pre drilled holes – bolted by a nut. Tethering is simple – you just have to unbolt the nut – fit the tether (the one you purchased) and screw in the nut back in the hole.

Remember – Regardless of how you tether kids’ car seat, it is important to make sure that car seat should not move more than an inch side-to-side.

If your car seat is installed incorrectly, it will move around in the vehicles seat. This will increase the risk of injury in a crash.