Welcome to the epic showdown – the Nuna Pipa vs. UPPAbaby Mesa.

I’ve raised two kids in UPPAbaby Mesa and have written about the Nuna Pipa extensively…more than I care to remember.

I’ve analyzed both car seats in detail in separate reviews.

I know every nut and bolt of what makes them tick, but I never pitted them against each other in a direct comparison.

So, I’m kind of excited…mainly because it’s not an easy task because we’re talking about similar car seats.

Still, I believe the devil is in the details, and there is a ‘better’ choice for every parent.

I’m confident I can help you make that choice…just give me 5 minutes so your time and really dig into this comparison.

An outline of the comparison – finding your way around

I’ll start with a brief outline of what’s to come. Based on that, you can skip back and forth and find the exact bits you need:

Moving on…we have some comparing to do. 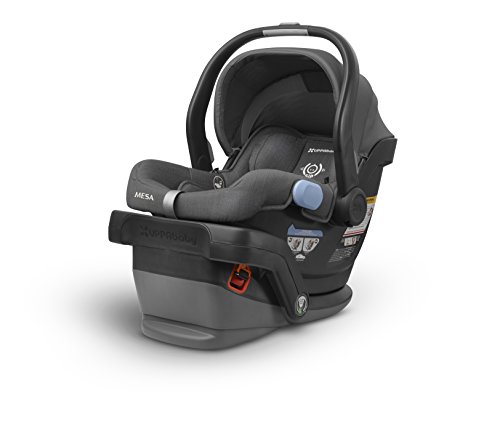 Specs of the car seat

Four versions of the Mesa

There exist four versions of the UPPAbaby Mesa – Jordan, Henry, Jake, and Bryce.

Joran and Henry are premium and boast Merino wool. They also cost more.

Apart from that, the difference between the four seats comes down to the color scheme:

Overview of the UPPAbaby Mesa features:

What I love about this car seat

Two aspects of UPPAbaby Mesa stand out in terms of safety – the EPP foam used for the extra side impact protection and the chemical-free merino wool.

What does wool have to do with car seat safety?

Merino wool is the only way to make a car seat flame retardant without using chemicals in the seat cover.

UPPAbaby Mesa car seats were the first ever to take that approach, which changed the industry.

Today, UPPAbaby is not the only maker of infant car seats to use wool, but being the first will always count for something.

The more direct aspect of car seat safety is the physical protection of the baby in a collision.

UPPAbaby Mesa goes a step beyond the federal safety guidelines by taking special care of the head area.

The foam they use for the extra padding is not just any old car seat foam.

It’s EPP (short for Expanded Polypropylene), which has a range of impressive properties:

It’s like a higher power wanted to give us something to be used in infant car seats and made EPP.

Read more about the UPPAbaby Mesa in my detailed review here.

Easy installation – with or without the base

I’ve reviewed hundreds of infant car seats, and I stand behind my words when I say that the installation of the UPPAbaby Mesa is as good as it gets.

UPPAbaby takes a more direct approach to visual feedback (tightness and level indicators) than other brands.

There are no electronics, no numbers, or bubbles on the Mesa, and I prefer it that way – I’ll explain why when we get to the side-by-side comparisons.

I also put together a full installation guide for the Mesa here.

Infant car seats that require the parent to take the seat apart and re-thread one strap at a time are dying out.

And with good reason – they’re a pain to use.

In and of itself, its’ not unique because that’s the new industry standard. What sets it apart is how smoothly it works with the adjustable headrest.

The position of the crotch strap changes as the baby grows, too, which makes the size transitions seamless for the baby.

Quality and maintenance of the materials

It is heavy, but the extra heft gives it a durability aura you rarely see in an infant car seat. It’s listed to last seven years.

Whether it’s the premium Merino wool version or not, the materials still feel high-end – they’re soft to the touch but don’t lose properties when washed.

And yes, the fabric parts are removable and machine-washable.

Mesa has a 5-star rating in ease of use

NHTSA awarded UPPAbaby Mesa with a 5-star rating for ease of use. That speaks volumes.

But I’m in the habit of digging deeper when making comparisons, and it’s just hard to go by a single number.

Let’s do that…dig deeper, that is…

Convenience-wise, here are a few aspects that make or break an infant car seat:

We’ll come back to these convenience aspects in the side-by-side section.

Without adapters, the UPPAbaby Mesa is only compatible with the Cruz and Vista strollers (both from UPPAbaby).

With adapters, you can also fit it onto the UPPAbaby Minu and Ridge strollers and a handful of strollers from other brands (BOB, Mimi, Thule, Veer).

Not great, to say the least.

Luckily for those who like the Mesa, Cruz and Vista are arguably the best out there, so you’re not missing out on anything.

Specs and versions of the Nuna Pipa

The difference between the versions of the Nuna Pipa car seats is more substantial than that of the UPPAbaby Mesa – from weight and size to color and features.

To keep things simple; we’ll analyze the ‘basic’ Nuna Pipa in this section and go into other versions further down.

Features if the Nuna Pipa:

Benefits of the Nuna Pipa

The unique safety feature that propels Nuna Pipa to the very top in terms of infant car seat safety is the flip-out bar.

It might take some getting used to when installing the seat, but the added stability is a massive plus once it’s installed.

It follows in the footsteps of UPPAbaby Mesa by eliminating all flame-retardants.

The rigid LATCH connectors are another solution unique to the Pipa series.

They’re easier to use, provided that you can see the holes of the anchors. If the padding hides the holes, use the LATCH guides that come with the Pipa.

I love the fact they added these to the package. Not because they’re game-changers (it’s just a plastic pocket to push the seat foam to the sides) but because it shows the attention to detail.

Any Nuna Pipa car seat comes with your run-of-the-mill bubble indicator on the sides.

It’s simple and basic, but it does the job.

The infant insert is well-thought-out.

Dare I say better than any in this price range?

You can remove a padding layer from the sitting section.

So, instead of using the same insert as the baby grows, you make them more comfortable by adjusting the padding.

Before the dedicated ring adapter hit the market, pairing the Nuna Pipa with the Cruz and Vista strollers was a messy ordeal.

You’d see generic adapters listed for the Nuna Pipa, but almost none of them was a perfect fit.

The dedicated ring adapter made the compatibility issues a thing of the past. It’s installed seamlessly, stays stable with the Pipa on, and allows you to take the car seat with just one hand. 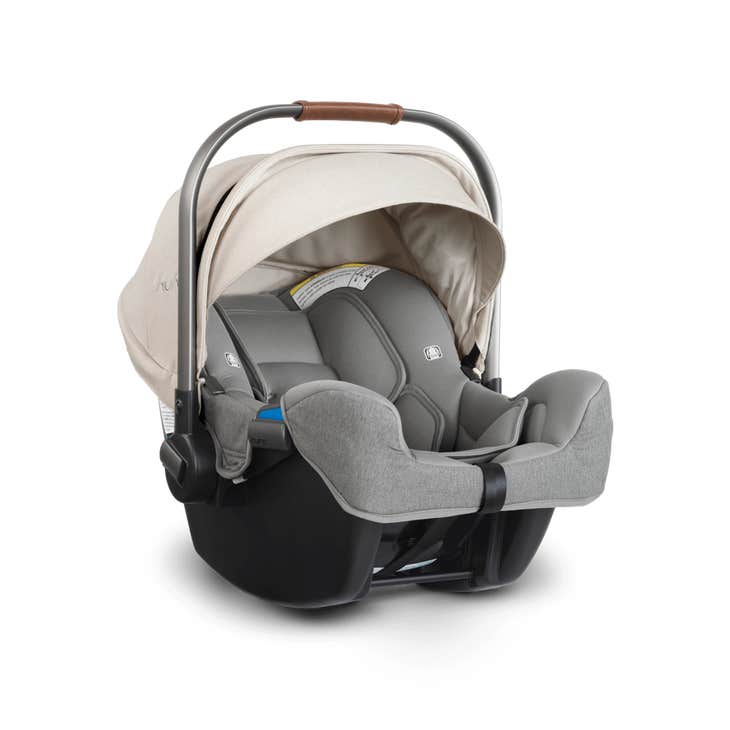 OUT OF STOCK
Best Overall 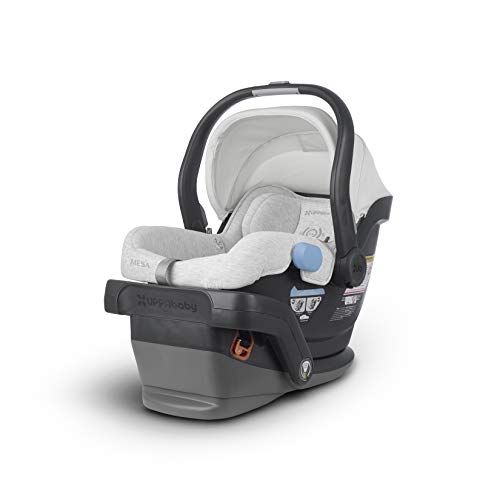 This is where the rubber meets the road.

I’ll take my time and compare the two car seats in all the crucial aspects. I’ll be concise and try to reach a clear verdict on all the factors that matter.

Mesa and Pipa are among the safest car seats out there. Both exceed the federal safety guidelines.

The steel stability bar of the Nuna Pipa makes a significant difference because it stops the seat from rotating or moving forward in a crash. Pipa was also awarded a slightly higher safety rating by Consumer reports.

On the other hand, the side impact protection of the UPPAbaby Mesa is a great touch.

Verdict: I’m giving this one to Nuna Pipa because staying put would make a bigger difference in a crash than lowering the G force.

Installation comparison – with the base

Not just compared to Mesa, but pretty much any infant car seat. The rigid design knocks it out of the park.

The install of Mesa’s base feels more streamlined, and the feedback is more direct. I prefer the simple color-changing indicator to bubbles because it removes the parent from the equation.

Moreover, the UPPAbaby Mesa car seat connects to the base seamlessly, it’s easier to take out, and the tightness indicator is a massive plus if you’re using the seat belt.

Verdict: A comfortable win for the UPPAbaby Mesa.

Install without the base

This one is a tie, and both car seats get a point.

I prefer Mesa’s color-coding system because it makes things easier.

I prefer the European belt path of the Pipa series because it’s the ‘tighter’ setting. This would be enough for Pipa to take the point if all the versions could be installed without the base.

Verdict: Since three out of six ‘Pipas’ can’t be used without a base, I have no choice but to call a tie.

Even if you go to the Nuna Pipa Lite, the dimensions vary only slightly.

Verdict: The size difference is too small to be a separating factor, hence – a tie.

This one’s Pipa all the way.

The Mesa comes in at a hefty 10.36 pounds, and it’s heavier than any car seat from the Pipa series.

Verdict: We have an obvious winner here. If you’re looking for a light car seat, Nuna Pipa is the way to go.

UPPAbaby never aimed at broad compatibility with the Mesa. And I understand why…the two strollers it works with are awesome.

On the other hand, Nuna car seats are not only compatible with the UPPAbaby strollers (using car seat adapters) but with many strollers from other brands, too.

UPPAbaby Mesa vs. Nuna Pipa – comparing the harness and headrest

Two points for Mesa off the bat.

These two categories are really non-starters for Pipa because the no-rethread harness of the Mesa is not only easier to resize (auto-adjusts with the headrest), but also features a smoother mechanism and a padded chest buckle.

Verdict: Comfortable win for the UPPAbaby Mesa in both categories.

Other categories – to close to call

Above are the quality aspects that make or break an infant car seat.

It’s also the aspects worth comparing because the differences are substantial enough to pick a winner.

The two seats are two similar in all other non-crucial aspects like:

Nuna Pipa vs UPPAbaby Mesa – summary of the comparison

I could go on and list all the slight differences, but this is my point – giving any of the two seats an edge for the minor factors would be unfair.

It would probably be misleading, too.

And before you think it, I didn’t tweak the categories to make it so – those were predetermined.

So, where do we go from here? Nuna Pipa or UPPAbaby mesa?

This is my advice – go back to the comparisons and choose the ones that matter more to you. That will settle the tie instantly, and you’ll have your answer.

Check out my other favorite versus comparison between the UPPAbaby Mesa and the Chicco keyfit 30.