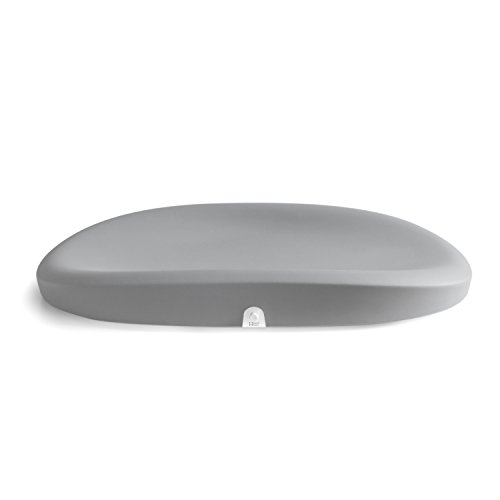 In this review, we’ll look at the nuts and bolts with the goal of answering one question – is it worth the hefty price tag?

I’ll do my best not to waste your time with the stuff you already know.

Instead, I’ll aim to do two things:

Benefits of the Hatch Grow Smart Changing Pad and Scale

Covering all the benefits would be of little use, so I’ll focus on those that stand out.

Most scales can track weight down to 0.5 oz.

The Hatch Baby Grow scale takes it all to a new level.

The 0.25 increments mean that not only is it precise for tracking the baby’s weight, but you can also use it for weighted feedings and measure how much milk they drink in a nursing session.

That kind of accuracy comes with a caveat – you’ll need to be diligent and consistent in the weighing because wet and dirty diapers can mess up your records.

The smart changing pad does as good of a job as any standalone changing pad, and it doubles as a scale.

That’s the gist of the sales proposal.

It costs more than a changing pad or a scale, but it costs less than buying a (decent) pad and scale separately.

Let’s say that you got a good changing pad like the Keekaroo Peanut – some of its versions would set you back more than the Hatch Baby Grow.

The question then becomes, “Is the Hatch as good as a standalone pad?”

I’d argue YES because it ticks all 4 major boxes:

I’d go as far as saying that, even it wasn’t a scale, this would be a great changing pad.

Any new parent has the instinct to stay in the loop as much as possible. The Hatch baby app gives you just that – an insight into the baby’s growth, sleep, and feeding. 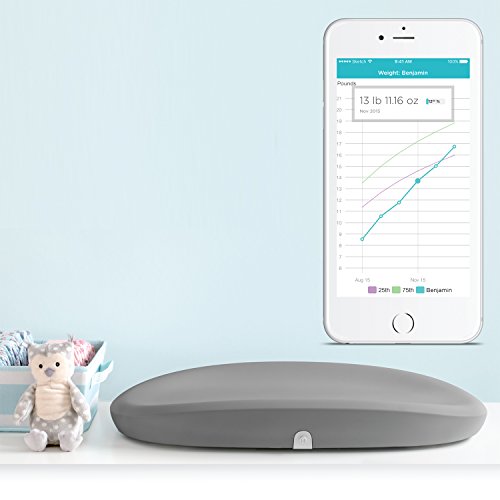 You pair your phone with the scale via Bluetooth; it automatically syncs and gives you precise instructions on how to zero out the Hatch.

An overview of the app features

The default tab for the app is the dashboard which gives you shortcut access to key stats like feedings, sleep, diaper change, and weight.

The second tab is a more detailed view of the feedings.

The first thing you’ll see here is a prominent timer. While nursing, the timer keeps separate track for the left and right sides and pairs the times with the feeding amount.

If you scroll down, you see the feeding history. You can also choose to add a nursing entry manually if you didn’t record it on the Hatch.

At its most basic, the app gives you two options – to take a one-off weight measurement of record weight pre and post-feeding.

Hardware-wise, the Hatch is minimal – there are no screens and control buttons on the pad – it’s all in the app.

Apart from the weight, you can also track their sleep habits, feeding schedule, and diaper changes.

Finally, the app can organize the data into neat charts to share with your partner, caregiver, or doctor.

What I liked about the Hatch Grow

Out-of-the-box, Hatch is as simple as it gets.

You open the box, pull out the red notch on the bottom side to engage the batteries that are already inside.

The 0.25 increments when the industry standard is 0.5 is nothing short of impressive.

If you just want to keep track of the baby’s growth, lesser scales light to the trick. But if you want precision and the option to do weighted feedings, Hatch has no real competition. It’s the same kind of accuracy you’d get from a professional.

Without the Hatch baby app, this would be just another changing pad.

With the app, it transforms into a smart changing pad that talks to you through charts and graphs that cover all the stats a parent might want – from weight and length to sleep, feedings, diaper changes, and pumping.

The graphs also include the growth curves so that you see where your baby is in the growth percentiles.

Adding the various growth curves is a great touch because it’s personalized. Instead of googling and guessing, you follow the growth curve for their percentile.

Finally, you can share all the data with your doctor or caregiver and get notifications when you’re away. Staying in the loop with everything that happens means the world to new moms and dads, especially during those first few weeks and months.

How the Hatch app compares to others

I find the app easy to use and fairly intuitive, and I like the small touches, like adding your baby’s daily photo to the dashboard.

It might not be as well-rounded as standalone tracking apps, but it never tries to do that.

It sets the goal of getting the most out of the smart changing pad, and on that it delivers…and then some.

Hatch does a good job as a changing pad

If there were no app, Hatch would still be a solid changing pad.

The ergonomics are solid – the sloped edges leave an impression of stability and safety. 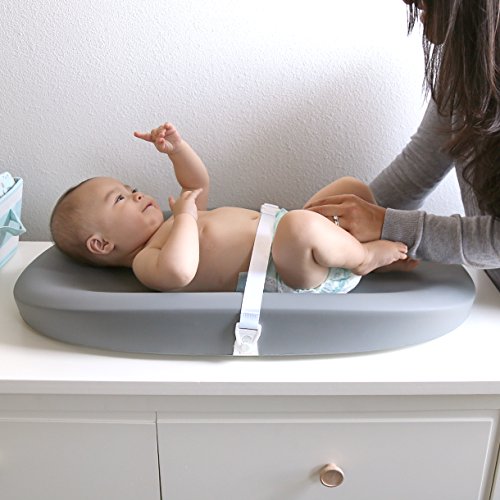 It’s light (weighs only 7.5 lbs), so it’s easy to use with one hand. The texture is plastic that still feels comfy and doesn’t get too cold for comfort (a common issue with plastic pads).

It’s wipeable and doesn’t retain moisture. The surface repels moisture, so something as simple as wet wipes will do the trick. It’s not as soft as silicone-coated pads, but it’s easier to clean.

The straps can be detached from the pad and can be cleaned separately. That makes all the sense in the world because the fabric is not resistant to accidents like the pad’s surface. It’s a common-sense feature that’s missing in many similar pads.

The padded feet are a nice touch – both in terms of stability and furniture protection.

What could be better

It’s a peg smaller than the Keekaroo Peanut.

The maximum weight is listed at 44 lbs. In reality, most babies will get too strong or big to get an accurate reading at that weight.

Chances are you’ll stop using the Hatch before the baby gets to those higher weights.

With that said, I’m not sure that making it any bigger would be a plus because a fussy baby at 40 lbs of weight would probably be too much for the Hatch to ‘handle.’

Summary of the Hatch review and key takeaways

If your parenting style includes staying on top of things at all times, there are very few tools on the market as useful as the Hatch Grow.

Is it worth it?

I’d say absolutely yes. It’s both cheaper and better than the previous version.

It’s of those baby products that make a direct and immediate impact on the day-to-day of both parents and babies.

You can see the complete list of best baby scales here or learn more about other ways to weigh your baby at home.